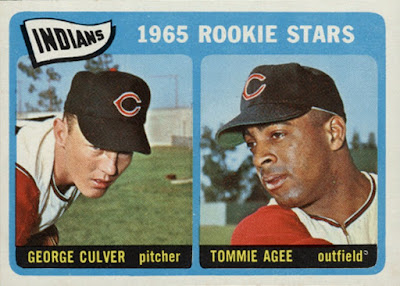 For the second post in a row we have rookie cards of players who would become Rookie Of the Year. Here is a 1965 Rookie Stars card that was ahead of its time. Although both went on to have solid MLB careers, neither played for the Indians in the 1965 season as projected on this card. 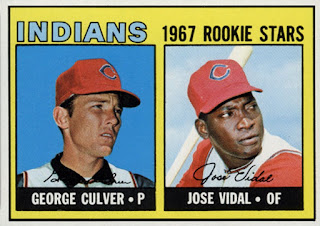 George Culver didn't play in the big leagues at all in 1965. He finally got called up in September of 1966. At that point Topps gave him a do-over and included him on this 1967 Indians Rookie Stars card along with Jose Vidal.
Culver played from 1966 until 1974 with the Indians, Reds, Cardinals, Astros, Dodgers and Phillies, After he was released by the Phillies he signed with the Nippon Ham Fighters of the Japan Pacific League. He saw very little action there and made an unsuccessful attempted return to the MLB. Instead he spent over 30 years as a coach, manager and pitching coordinator in the Phillies and Dodgers organizations.

His best year was 1968 with Cincinnati. He was used primarily as a starter and had career bests in most pitching categories, both good and not so good. He had highs in wins with 11 and strikeouts with 114. He also had career highs in losses with 16, walks with 84 and led the league in hit batsmen. On July 29th he no-hit the Phillies 6-1. He gave up the only unearned run when Dick Allen reached first and was granted second on a throwing error by future Hall of Famer, Tony Perez at third. Allen made third base on a ground out to first then scored on a sac fly by Cookie Rojas. 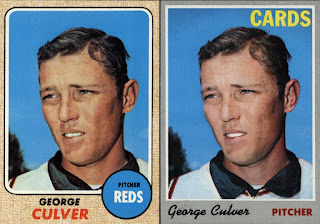 For his Card That Never Was, I could have gone in many different directions. First there was no card from 1966 but with two other rookie cards, I decided against a third. Other candidates for a remake were his 1968 card on the Reds and his 1970 card on the Cardinals. Both used the same hatless photo of him in an Indians uniform. 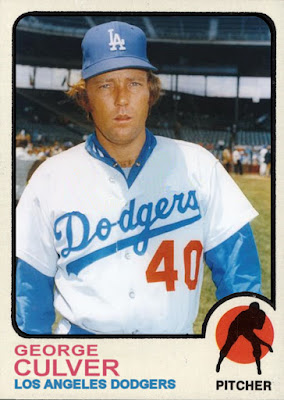 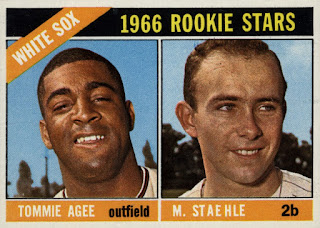 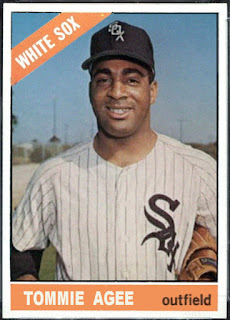 1966 would turn into a Rookie of the Year campaign for Agee. He hit .273 with 22 homers 86 RBIs and 44 stolen bases. He earned a Gold Glove and made his first All Star appearance in 1966. He got 80% of the Rookie of the Year votes and even received several MVP votes landing him eighth in the AL. 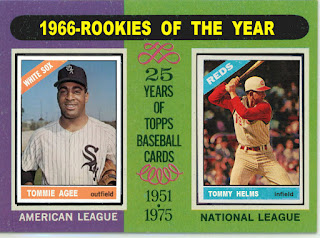 I have made several Cards That Never Were of Agee for my other blog. He was included in my Rookie of the Year project so I made a solo 1966 Topps card of him which was then included on the 1975 cards I made that were in the same vein as the MVP cards Topps made. 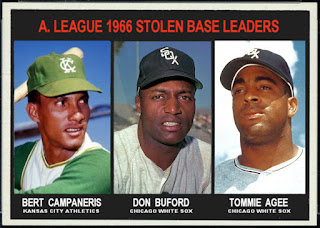 He was also included on a couple of League Leader Cards That Never Were. Topps didn't begin including stolen base leader cards in their sets until 1973. But if they had he would have occupied the third spot in both 1967 and 1968. Oddly the stolen base top three leaders were identical in 1966 and 1967. Bert Campaneris, Don Buford and Tommie Agee took first, second and third respectively both years. 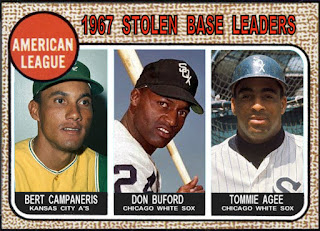 Even though I've created several Tommie Agee Cards That Never Were already, There is one more that I thought needed to be made.  If you are a baseball card geek like me (and let's face it, if you read this far, you are) the you are familiar with this card: 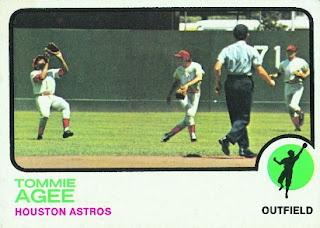 It shows an Tommie Agee airbrushed into a Houston Astros uniform. It also shows Bud Harrelson and Rusty Staub similarly airbrushed.  Staub was famously not otherwise included in the 1973 Topps set (nor the 1972 set for that matter). That wrong was corrected by me on my other blog here. 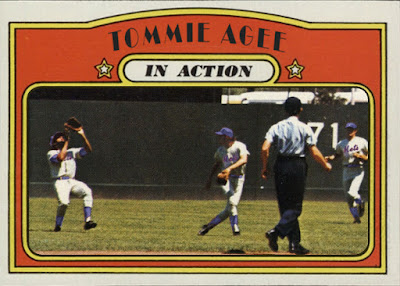 This was a first for me. I like this card because I like Tommy Agee. And even though 1966 was his Rookie of the Year season, this was his true rookie card. It falls a bit short of the "Binder Worthy" mark. Unfortunately, the next category I created was "Guilty Pleasure" and I don't feel guilty at all about liking this card. So I compromised and gave it a 6.5. 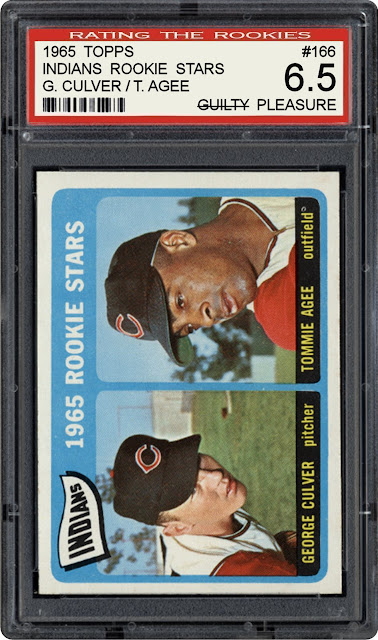 About "Rating the Rookies"

This blog is a spin off of Cards That Never Were. Topps made 737 designated rookie cards from 1959-1980. I will stand in judgement of them all. I use a random number generator to pick these cards. I then critique them and create "Cards That Never Were" for the player(s) on the card.

I have my own grading system. Just like those pricey grading companies, I'll hermetically seal the card and permanently attach my (somewhat) unbiased opinion along with a grade from 1-10. Unlike the grading companies, my score has nothing to do with the condition, but the card (and players) itself.

My Other Blog: Cards That Never Were

Cards That Never Were

Links to My Favorite Blogs